Before you start Deveoping iOS Applications

Before you start developing  applications, set up a development environment to work in and make sure you have the correct tools.

To develop iOS application, below requirements

Xcode is Apple’s integrated development environment (IDE). Xcode includes a source editor, a graphical user interface editor, and many other features. The iOS SDK extends Xcode to include the tools, compilers, and frameworks you need specifically for iOS development.
The first step in developing applications is to Download Xcode/SDK from iOS Dev Center at http://developer.apple.com, you must also join iOS Developer Program which is per [$99/year] for all devices.

Model-View-Controller (MVC) is central to a good design for any iOS app. MVC assigns the objects in an app to one of three roles: model, view, or controller. In this pattern, models keep track of your app’s data, views display your user interface and make up the content of an app, and controllers manage your views. By responding to user actions and populating views with content from the data model, controllers serve as a gateway for communication between the model and views.

As you’ve built your ToDoList app, you’ve followed an MVC-centric design. The interface you built in storyboards makes up the view layer. AddToDoItemViewController and ToDoListTableViewController are the controllers that manage your views. In Tutorial: Add Data, you’ll be incorporating a data model to work with the views and controllers in your app. When you begin designing your own app, it’s important to keep MVC at the center of your design.

Target-action is a conceptually simple design in which one object sends a message to another object when a specific event occurs. The action message is a selector defined in source code, and the target—the object that receives the message—is an object capable of performing the action, typically a view controller. The object that sends the action message is usually a control—such as a button, slider, or switch—that can trigger an event in response to user interaction such as tap, drag, or value change.

For example, imagine that you want to restore default settings in your app whenever a user taps the Restore Defaults button (which you create in your user interface). First, you implement an action, restoreDefaults:, to perform the logic to restore default settings. Next, you register the button’s Touch Up Inside event to send the restoreDefaults: action method to the view controller that implements that method.

You’ve already used target-action in your ToDoList app. When a user taps the Done button in the AddToDoItemViewController, it triggers the unwindToList: action. In this case, the Done button is the object sending the message, the target object is the ToDoListTableViewController, the action message is unwindToList:, and the event that triggers the action message to be sent is a user tapping the Done button. Target-action is a powerful mechanism for defining interaction and sending information between different parts of your app.

Now that you have learned the concepts, let us start creating the iOS application. 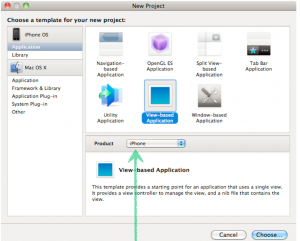